LASKA is fronted by three sisters who write beautifully self-aware and earnest songs. Hannah, Mookie, and Bex Morton are the foundation of LASKA. 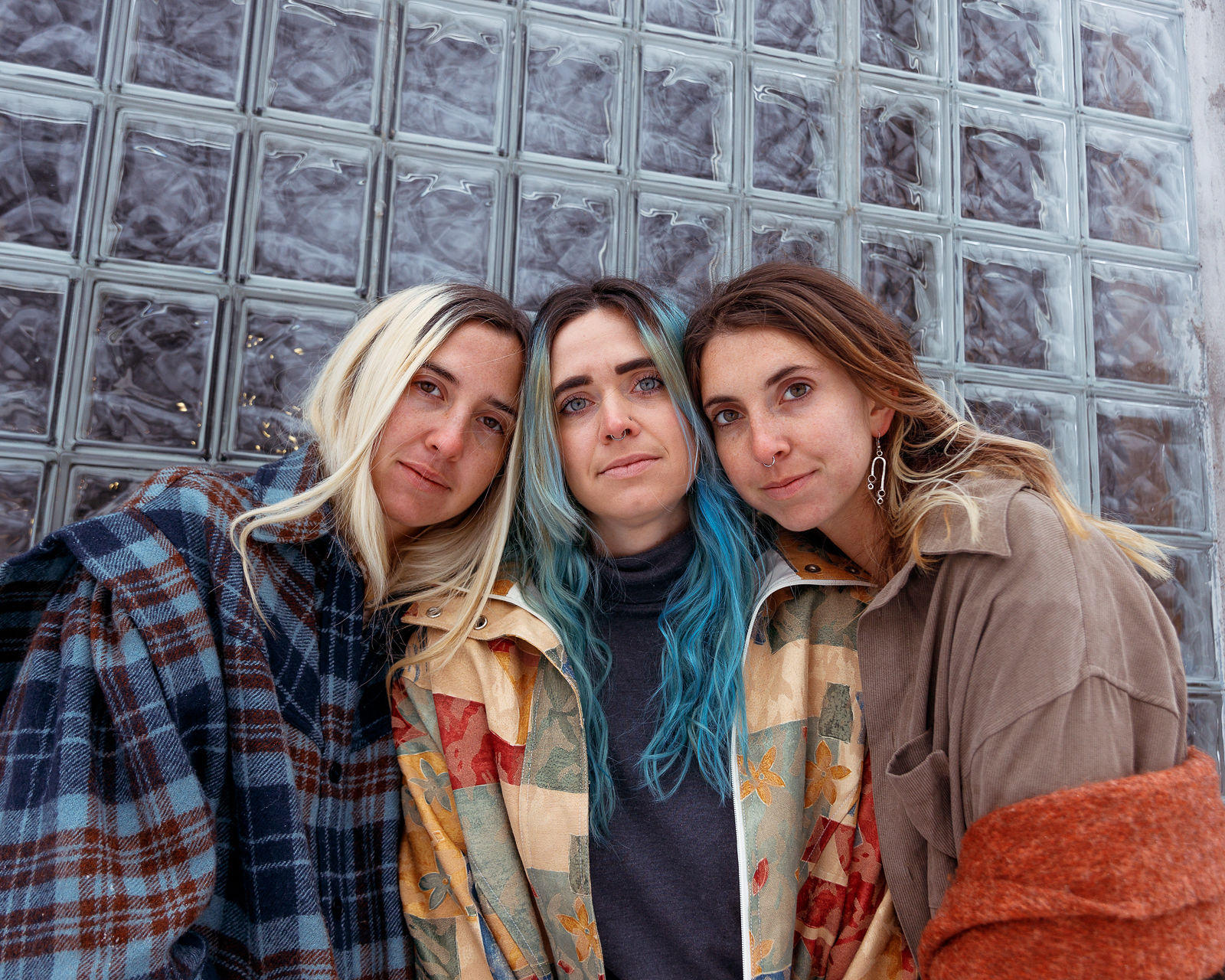 The melancholy, harmony-driven sound draws from the midwestern heartland just as much as the LA-coast and continues to evolve as their landscape changes. All three sisters contribute to the writing and have a way of leaving you at the beck and call of a song’s emotional territory. Haunting, reflective, and lovely.

Since their formation in 2016, the band has grown to be a six-piece act. Their live sound blends rugged guitar, synthesizers, and pedal affected violins, bringing listeners from song-in-your-bedroom intimacy to vast moments in sonic canyons. The Mortons play alongside Evan Middlesworth (producer/guitar), Keegan Burckhard (drums), and Robbie Weisshaar (bass).

Pop-Folk band LASKA released their acclaimed sophomore album – Endless Patcher on June 3, 2022. The collection of songs on Endless Patcher is both mystical and grounded in the everyday experiences of what we are hoping for the future – composed of ten evocative original songs performed with layers of instrumentation and the Morton sisters rich harmonies.

The new music on LASKA’s second album Endless Patcher hits the sweet spot that sits between folk-influenced pop and rock. What you hear on Endless Patcher isn’t really a patchwork, as the album’s evocative title might lead you to believe. It’s an album that addresses the density of lived experience, and it’s very American – in the best sense of that term. If a record can be both mystical and grounded in the everyday, Endless Patcher fits the bill.

Minnesota Public Radio / The Current 89.3FM recently debuted “Dog Bite” on The Local Show as “Song of the Day”, with Mike Pengra of Radio Heartland featuring the songwriting and performance of LASKA masterfully produced on Endless Patcher.

It’s a seamless record that is part dreamscape, but the pleasures of Endless Patcher feel earned. There’s introspection and propulsion, as you hear on “Dog Bite,” an instant classic of inspired harmonic language and rhythmic drive. In fact, “Dog Bite” sounds like the kind of pop addiction you can live with, as does “Pull,” the latter anchored by pedal steel and another evocation of Joni, Judee, John Phillips and similar masters of sunny pop.

The music resonates with PopMatters in that, “Because the band writes about the way the push-and-pull of everyday life can inspire rich art, LASKA achieves a truly syncretic style on Endless Patcher. They draw from the, sleek, slightly abstract post-rock of bands like The Sea and Cake, which means every guitar lick and melodic turn is cunningly integrated into songs that are both formally satisfying and full of rumination on human nature.”

Music Mecca writes, “It’s an album that addresses the density of lived experience, and the complexities of life as we now know it.”

These days, the world being the complex place it is, the Morton sisters reside in two very distinct places in the United States. When you hear how deftly they use elements of what’s sometimes called Laurel Canyon pop – the sort of music pioneered in the late ‘60s by folk-adjacent singers and songwriters like John Phillips, the leader of The Mamas & the Papas, and Joni Mitchell, along with Judee Sill and Crosby, Stills, Nash & Young – you understand how geography and music intertwine. Endless Patcher is about the possibilities that lie underneath the quotidian, and it’s also about space, time and memory.

On a more practical level, Mookie and Bex live in Los Angeles, while Hannah makes her home in Minneapolis. You hear the creative tension between the Midwest and Los Angeles throughout Endless Patcher, and it’s clear that Mookie and Bex were seeking, in their own ways, the allure of California when they moved to Los Angeles. As Bex says, “I moved back to Los Angeles in 2020. I was writing in a garage for a while. It was the start of something that was my own – I found my style in that space, what feels good to play. Los Angeles is both the ugliest and most beautiful place to be an artist. Each day in the city is so full and saturated.”

The culture based Eau Claire magazine, Volume One says in a recent article and interview with Hannah, Mookie and Bex – “The music on LASKA’s new album showcases the Morton sister’s constantly close connection, manifesting in an album primed to impress fans of their brand of indie-folk music.”

It’s been a journey of discovery since they began playing Monday night shows in Minneapolis, and Endless Patcher is the culmination of their work ethic and finely honed aesthetic. That aesthetic was clearly defined on their first album, 2017’s Ceiling Zero – listen to “Parking Lot,” a beautiful slice of post-Laurel Canyon pop, with the kind of chord changes that make you sit up and notice. Their immaculately tailored approach to songwriting and production shines through Endless Patcher. “Funhouse” – the first single track from the album, released April 15, is a sleek, gleaming post-rock song with sophisticated chord changes that communicate both tension and release.

Along with Hannah, Bex and Mookie, the musicians on Endless Patcher contribute to its rounded sound. The band LASKA includes a well-oiled machine of talented peers and fellow artists – Evan Middlesworth plays guitar and bass, alongside bassist and pianist Robbie Weisshaar, who arranged the strings on “Purple Blue.” Keegan Burckhard, Dave Power and Sam Enochs rotate on drums, with Ben Lester adding pedal steel. Kyleen King plays violin and viola on “Purple Blue.”

In its mastery of the cutting-edge techniques of advanced folk-pop, Endless Patcher stands tall with similar works by bands like Olden Yolk. There are echoes of the baroque pop of The Left Banke and the individualistic approach of singer-songwriters like Linda Perhacs and Judee Sill. LASKA knows about the joys of linear reality, a subject they tackle in “Linear.” They also display a feel for everyday pleasures, the changing seasons, in the contemplative “Window Shopping.”

And the title? As was mentioned earlier, Endless Patcher isn’t a patchwork. It’s a unified view of the world, and we need that now, right down to the way Bex, Mookie and Hannah harmonize in ineffable ways. As Hannah says about the title, “Endless Patcher is about recognizing the magic of the going through it. Sometimes it feels like I’m always waiting to get through the next part, wondering when I will just get there. But this title is about recognizing that we’re always going through something, and that’s just another part of life we need to find the joy in. Always adding another patch to the jacket.”

Music in Minnesota writes, “The themes of Endless Patcher are about recognizing the magic of going through life. It’s being present while being perceptive of that journey, while recognizing joy. The song “Dog Bite” is a healing bruise that reminds you of the past, while feeling hopeful for the future.”

Announcing the supporting Endless Patcher tour dates for the new music, Live For Live Music writes, “Since the band is a true collective, with each sister adding her own nuanced take on rock, Endless Patcher is both densely constructed—the level of detail you hear throughout the album is stunning—and very direct.”

You can catch LASKA out on tour in support of Endless Patcher this summer.